I’ve just spent the two last days being at JAMstack_conf London learning about a bunch of neat stuff, but more importantly, having met an array of great people. I have now been on three of three JAMstack_confs, and right of the bat I must say that I recommend these conferences if you’re into working with the web in some capacity.

#Wait a minute, what is a JAMstack?

Having just been to a conference that has JAMstack in the title makes it easy to forget that it’s not a known concept to everyone. The JAM is JavaScript, APIs, and Markup. It signifies an approach to making websites where you use JavaScript and APIs to build your site and deliver prerendered markup to your readers. The ethos is really making sure that your website is fast, secure, easier to scale, and developer friendly. If you read this post on my domain, then you’re on a JAMstack website.

Static site generators are a significant part of the JAMstack scene. They have been around for good while. What’s “new”, however, is that there’s more attention given to the dynamic nature of the modern web. By using dedicated services with APIs and client-side JavaScript to take care of those things. In contrast to having a website directly connected to a database that has to re-render the same markup for every visitor each time.

#So JAMstack_conf, how was it?

Of course, I’m at JAMstack_conf not only as a participant in the community but also in my capacity as a developer advocate for Sanity.io. Which means that I represent a vendor in the field. This role is still fairly new to me, and there’s still the self-awarness that you are there with an agenda: You want people to try out the thing you’re working with. The nice thing about JAMstack_conf, however, is that people are curious and open, and in fact, come to you to ask questions and learn. So I just have to make sure to make myself available.

Another nice surprise with this JAMstack_conf was that I also got to meet a bunch of people that have used Sanity for a while, and that I’ve only met in cyberspace. It’s really nice to put a face on people that you have been talking to in the numerous Slacks I’m in. 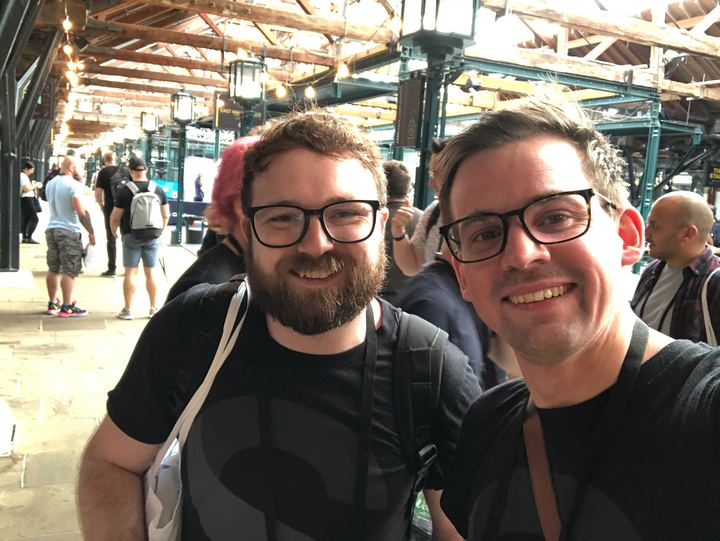 My good pal Jamie held a blazing lightning talk and gave us a solid shout out. Much appreciate! 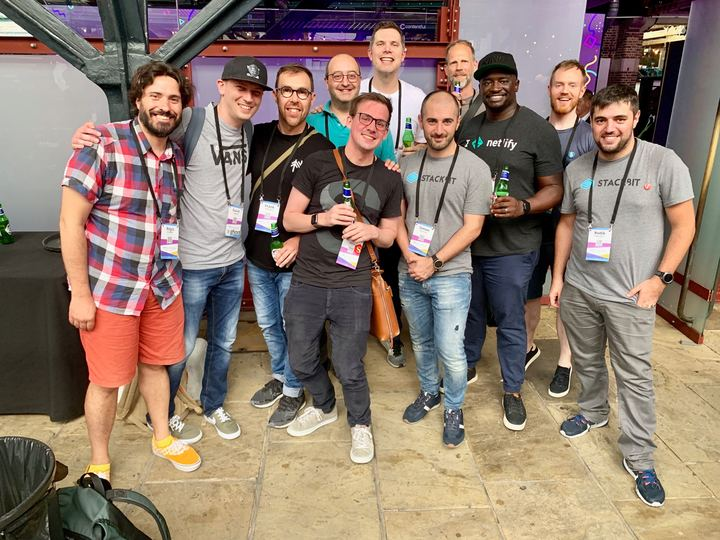 The New Dynamic is like the lounge of the JAMstack community and some of us got into a group photo (We have to work on the demographic though).

#But the talks Knut, the talks‽

The JAMstack_conf organizers usually end up finding some great speakers. They tend to fall in two categories: Those who are great at doing talks (because they’ve been doing it a bunch), and those who are maybe not as experienced but have some interesting insights. What I appricate with the scope of JAMstack is that you end up with a broad set of themes. We have the nerdy code-snippets-on-screen talks, like how Ives and his team built Codesandbox.io or Una’s inspiring session about CSS Houdini (because pixelated gradient borders are awesome!). There’s also more of the higher level stuff, like Simona’s systematic introduction to serverless and Vitaly’s step-in talk for Chris (of CSS-tricks) (who had a bike accident) about the take-aways from the JAMstackification of Smashing Magazine.

I really appreciated learning more about web performance. I must admit this is a topic where I often feel it’s difficult to discern between what’s “web perf cargo culting”, or what is actually useful advice. I enjoyed Christian’s lightning talk about The State of JAMstack in Africa and how to take lower-powered devices into account. It was also some good quality programming to put Jake & Surma at last with their magnicifent and hilarious “Setting up a static render in 30 minutes”, in which they talked about how they made Proxx work for 2G and 3G devices.

#Wasn’t you on stage as well?

We were asked by the good folks at Netlify if Sanity.io wanted to announce something in a lightning talk session at the conference. So we figured this would be a good opportunity to announce that we’re making our query language GROQ open source. That meant that we had to prepare the draft for the specification for public consumption. It was also a good occasion to implement a parser for JavaScript and a CLI that utilises it. So my colleague Magnus “Judofyr Holm did some really amazing work creating a parser-parser that let us set up an alpha version of groq-js rather quickly.

Now, I really really really like GROQ. It was one of the things that won me over to Sanity before joining. I have done a bunch of talks and lectures before, also for large crowds. So I wasn’t expecting to be as nervous as I was. Seriously, there were quivering hands and tunnel vision. Just to be sure, I had also set myself up for some live command line querying. I did mess it up somewhat by accidentally printing 80k lines of prettified JSON, but I managed to get it back on track and show some of the query magic.

My takeaway for my next talk, is that I’m not really stressed about things going wrong, but I have this thing where I start to get apologetic about things I really care about. Mainly because I’m afraid that people won’t find it interesting. And that isn’t helping anyone. So next time I'm on stage I'll remember to channel more of my excitement.

A special mention goes out to Netlify’s Phil Hawksworth’s MCing that tempered my nerves somewhat — his down-to-earth and witty approach to MCing makes for a friendly and safe atmosphere.

#Next time in San Francisco!

So I guess this is a flaming endorsement. If you’re interested in how you can have a better time as a web developer or a web development adjacent, do consider getting yourself a ticket for JAMstack_conf San Francisco in October. I’m pretty sure that the organizers will tune this one to 11. And hopefully, I'll meet you there!